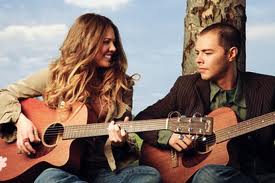 Ever since 2007, many of my students have simply fallen in love with Jesse y Joy, a brother/sister duo from Mexico (mother from Wisconsin, father from Mexico).  That first year of my discovery, Jesse was 20 and Joy was 17, and the song was “Espacio Sideral”. There is an official video:

and then there is the video that fascinated my students, that I used because at the time I did not see the official video:

While I also liked the song, I didn’t understand why so many of them were so drawn to the song.  They requested it non stop for weeks.  They learned the lyrics by heart.  They sang the lyrics with and without the song.  Was it because Jesse and Joy were so young? Seriously, Joy at that time was just a year older than most of my students?  Was it because they didn’t look like artists from Mexico?  Was it because the song had references to familiar things?  Was it the pop/folk sound of the music?  I didn’t know, but what I did know was that without any effort at all, they had a grasp on vocabulary that absolutely was not part of our curriculum:  regalar, espacio sideral, proteger, poderes, via láctea, caja, hornear, quisiera….quisiera!

The next year, I had some of the same students from Spanish II in Spanish III, and what was their first request….”Espacio Sideral”.  But, it was the beginning of the year, and we were reviewing preterite and imperfect, so I decided to branch out and try another Jesse y Joy song, “Llegaste tú”.

On the first listening of the song, some declared it wonderful, others didn’t like it at all.  No matter, our purpose now was to look at the verbs.  What did they hear?  Obviously they heard llegaste. Most heard lloraba, era, eras, busqué, pude and cambió.  A few heard volví, quise and llevaba, but the unfamiliar verbs intenté, alcé and triunfó were missed. The next day we did a very brief cloze activity with the verbs and talked about why the verbs were preterite or imperfect.  This is an activity with that song that I have now used for three years.  This past year I also used “Somos lo que fue” in that review.

I have to add that Espacio Sideral remained so popular that it has been used in our Cabaret (a multicultural evening displaying the many cultures that make up our student body, featuring song, dance, poetry, etc.).  In 2009, one of our math teachers (of Cuban descent) played the guitar and sang the song with the audience singing along!

In the spring of 2010, I discovered another Jesse y Joy song called “Chocolate” that sparked the same response as the discovery of “Espacio Sideral”.  The students simply could not get enough of it!  Initially, the only video that I had seen was this:

The students liked it because the lyrics were right there, and the action, while minimal, was cute.  In the fall of 2010, I discovered the official video:

and I decided to use it with our beginning of the year “food unit”.  The song and the official video held great appeal for the students, and I was pleased because the lyrics also had many of our new vocabulary words (italiziced).

And to have a song that uses the idiomatic expression, sabe a, WOW! That’s a tough one to teach, and here it is naturally, repetitively in the song…what could be better?  This past year, I used other Jesse y Joy songs:  “Adiós”, “Volveré” (future), “Y te vas”, and ” Ya no quiero” as my warm up/entering the classroom/let’s switch to Spanish songs, and they were received with varying degrees of acceptance/enjoyment. This year, I think that I will use an idea from EFL Classroom 2.0 to combine the song “Chocolate” with other vocabulary from the food unit.  It’s a game called Mystery Box, which is describe by the creator of the game as “the most exciting powerpoint game I’ve ever used.”  Take a look, save it, and change it to suit your needs! Powerpoint: